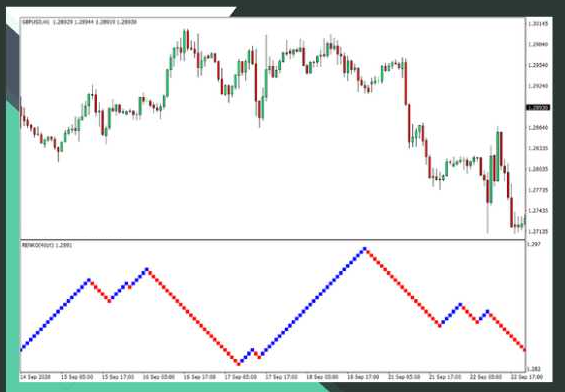 The Renko Chart is a type of price charting which was also developed in Japan. It was first introduced to the traders in the United States by Steven Nison in his book, Beyod Candlesticks.

Renko Charts are charts that use bricks instead of candles to represent price changes. The bricks are usually of equal size, but they can be of different sizes. The bricks are placed on the chart when the price moves up or down by a certain amount. This amount is called the box size.

Renko Charts get their name from the Japanese word “renga”, which means “brick”. This is because the boxes on Renko charts look like stacked bricks.

What is the Renko Charts Indicator?

How does the Renko Charts Indicator Works?

Traders can change the number of points or pips each brick represents to fit the currency pair and time horizon they are trading.

How to Use Renko Charts for MT4? 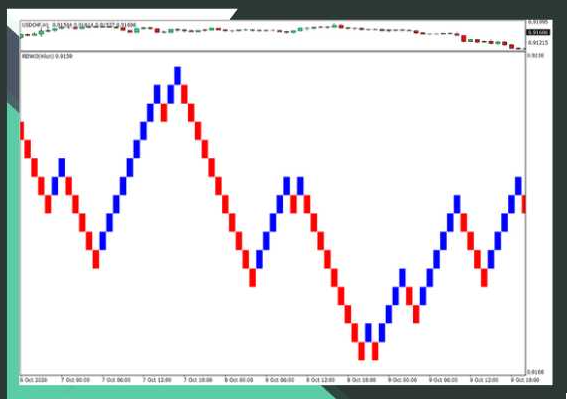 If you see blue bars on the Renko Chart, it means that the momentum or trend is reversing. When this happens, you can buy. If you see red bars, it means that the trend is continuing and you can sell. You can also enter a trade when there are a certain number of bricks moving in the same direction.

Wait for the price to reverse and go up. When it does, three blue bricks should form on the Renko Chart. That is your signal to buy. Set a buy stop order at the price of the high of the third brick. Make sure to set your stop loss at the price of the low of the brick that is three bricks behind where you expect to enter into the trade.

Make sure your stop-loss is set at the price corresponding to the third brick behind the current Renko Chart brick. If the price hits your stop loss while you are still in profit, then the trade will end automatically. 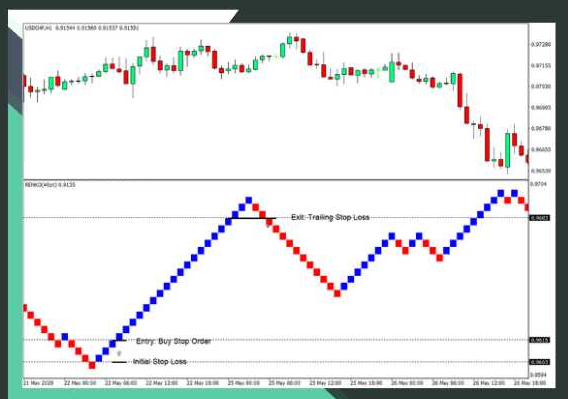 When the Renko Charts brick is three bricks behind the current brick, set the stop loss at that price. If the price hits the stop loss while in profit, allow it to happen. 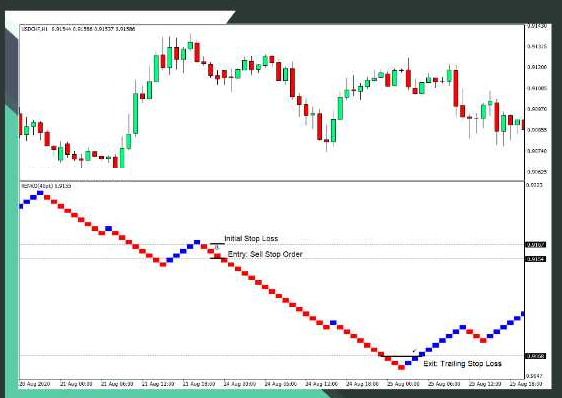 There are many ways to trade the Renko Charts. The example above is just one way. You can adjust the number of boxes you use to determine when you want to enter a trade, and how many pips you want the Renko bars to be based on.

The Renko Charts indicator is a very useful tool for trading momentum and trends. However, traders need to spend some time getting used to it so they understand how it works before using it in their trades.

Renko Charts and candlesticks do not match up. This means that traders need to watch the Renko Chart to see if momentum is reversing or not.

If you are a disciplined trader who can look at price charts for a long time, then the Renko Charts can be a very effective tool for trading trends and momentum reversals.

Trading in financial markets is a high-risk activity and it is advised not to risk more than one can afford to lose. Traders With Edge Limited does not take into consideration your personal financial situation. If you require financial advice, it is recommended that you speak to a financial adviser or licensed professional.

Traders With Edge Limited is not a broker, does not accept deposits for brokers and does not provide any investment services. Traders With Edge Limited does not act as or conduct services as a custodian. Purchases of programs should not be considered deposits. All program fees are used for operating costs including, but not limited to, staff, technology and other business related expenses.